Concordia professor describes her work is on the Mars One Project

How many people would volunteer for a one-way ticket to Mars? The answer may surprise you. More than 78, 000 people worldwide have volunteered to participate in the Mars One Project that aims to put a human settlement on the Red Planet by 2023.

How many people would volunteer for a one-way ticket to Mars? The answer may surprise you. More than 78, 000 people worldwide have volunteered to participate in the Mars One Project that aims to put a human settlement on the Red Planet by 2023. 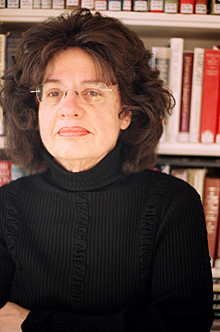 In the centre of the media frenzy surrounding this lofty project is Raye Kass, professor in the Department of Applied Human Sciences. Kass is on the Mars One advisory team charged with the responsibility to establish the selection critiera for the potential crew members, and consequently has been interviewed by numerous journalists and has appeared on various television and radio programs. On Saturday, May 18, The Montreal Gazette published an opinion piece (opposite the editorial page, an op-ed) written by Kass, which also appears below. On May 22, Kass participated in a live-chat hosted by the Gazette. The archive of the chat can be viewed here.

As someone who has been involved in numerous space-research projects with the Canadian Space Agency, NASA and Russian Academy of Sciences’ Institute of Biomedical Problems, I have come to learn a lot about human involvement in space flight. I thought I had seen it all.

But I was wrong.

When I heard of the Mars One proposal to build a human outpost on Mars, my first thought was this: “No way, no how.” For one thing, who would go? Who in their right mind would volunteer for this idea of Dutch entrepreneur Bas Lansdorp for a one-way voyage to the Red Planet to establish a permanent human colony there. And yet, ever since a news release was issued in May of last year announcing plans for an emigration to Mars in 2023, more than 78,000 people around the world have submitted applications for crew positions — including 35 Canadians.

My own incredulity grew even as I was brought on by Mars One to become part of an advisory team to establish criteria for crew selection. Not an easy task, to be sure. Having already worked in space-environment simulation, I had witnessed disastrous group dynamics even in these fictionalized space environments. The planning, training and considerations required in sending trained astronauts to space are considerable: replace the journeyers with ordinary civilians, as Mars One is proposing to do, and the challenge becomes even more mind-boggling.

But then I began to think: What would it take? If we assume that technology will in fact evolve far enough to logistically support a Mars One venture, what psychosocial factors would need to be considered? Building a sense of community is imperative to success. In fact, the men and women who will make this journey will need more than technological advances to see them through: while technology will get them there, teamwork will be what ensures they survive the journey. And so the team chosen for Mars One would have to understand this.

In keeping with this, the individuals chosen for the Mars One mission will, in my view, need to exhibit the following psychosocial attributes: resiliency, adaptability, curiosity, ability to trust, creativity/resourcefulness. I have recommended these attributes as psychosocial selection criteria because I believe people who have these qualities have the foundational attitude required to go to Mars. It all starts with attitude. Think of it. When a person finds herself, or himself, on Mars, with no way of being able to come home, and potentially questioning the decision they have made, what is going to ground them in the choice they have made?

In this respect, I don’t think I can stress strongly enough the importance of an individual’s capacity for self-reflection. Although I have listed five key selection criteria that have been embraced by Mars One planners, I cannot underscore the critical importance of an ability and openness to self-reflection and a willingness to build and maintain healthy relationships.

Although originally skeptical about Mars One, I now believe that the journey to Mars is not only possible, but will in fact become a reality. As for the one-way aspect of Mars One, it is not so different, really, from the departing mindset of those famous early explorers here on Earth — take, for example, Ferdinand Magellan, who led the first expedition (1519) to circumnavigate the globe, or Ernest Shackleton’s famous expedition (1914) to the South Pole and his epic struggle to lead his crew of 28 men to safety after his ship got crushed in packed ice.

When these two explorers started out, the crews of both expeditions were told they would probably never return home. Human nature is to push forward through a crisis. Mars One, to me, is not some far-fetched idea, but something that I take very seriously.

Having worked in the Department of Applied Human Sciences at Concordia University for more than 40 years, I have seen many students pass through my office doors. The advice I give them when they struggle is the same I will give to those dreaming of a journey to Mars: keep searching, keep exploring. When the human spirit stops exploring, something has been lost.